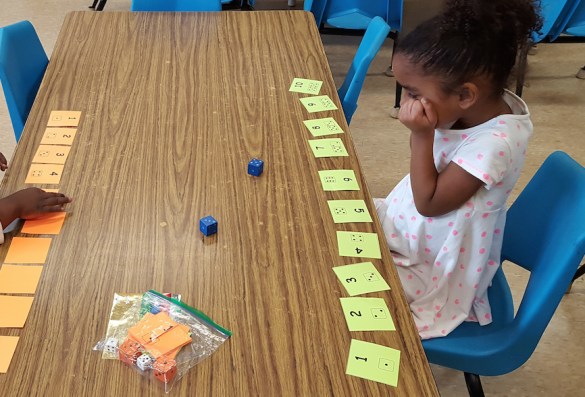 Games are fun. Games are also challenging. Developing a strategy, improving skills, the ups and downs of winning and learning—these all are important components of games. When students engage in mathematical games, many don’t necessarily realize they are doing or learning mathematics but when students practice or apply something they already know or understand, there is growth. When we exercise our muscles, they endure a process called hypertrophy, which causes micro-tears and prompts the body to repair and grow the muscles. When we are challenged intellectually, an analogous process occurs, stimulating brain growth. A good game provides a low-floor–high-ceiling opportunity for any student to join while also challenging them. Games and activities that cause productive struggle build capacity with, and in turn confidence in, mathematics.

Below is a noncomprehensive list of games we have found that students enjoy.

Product Bingo—A game for two players who take turns choosing factors and covering the product until one player gets four in a row (or column or diagonal). As written, it involves single-digit multiplication facts, but can be adapted to include more or fewer factors.

The Factor Game is another two-player game where students think about all the factors of a number and develop a strategy for earning more points than their partner.

Two Numbers—A game for one or two players in which numeral cards (0–9) are placed face up on a table and the goal is to turn all the cards face down. Player(s) roll dice and “turn over whatever shows up.” If the roll is a 6 and 2 for example, they could turn over the 6, the 2, the 8 (6+2) or the 4 (6-2). A broadly adaptable game, this could include numeral cards from 0 to 20 (or higher), negative numbers, something other than six-sided dice, multiplication and division, more than two dice, etc. The sky’s the limit. One version is described at Young Mathematicians.

Fraction Traction—One or two players take turns drawing a card with a fraction, then place that fraction’s worth of pattern blocks within three hexagons to ultimately fill all three. Play can be cooperative or individual using the same set of cards. This activity engages students in understanding fractions of areas, comparing to the whole, and making equivalent fractions.

KenKen—A puzzle (in online or printable forms) that adds operations to the logic used when playing Sudoku. KenKen boards come in a variety of sizes and difficulty levels.

Mystery Grid puzzles at SolveMe from EDC offer one more level of variety to the KenKen and Sudoku puzzles by using entries that are sometimes non-sequential (1, 3, 4, 8 or 2, 5, 7, 11) and include variable expressions.

Who am I? from SolveMe is an online activity that challenges students to determine a mystery number by deciphering clues. Among other skills, this game involves operations, place value, logic, number recognition, and variable representations.

Mobiles from SolveMe is a virtual game that asks players to balance shapes with varying “weights.” The activity involves understanding “equal,” and exercises algebraic thinking through finding unknown values using given information. Be sure to explore the tutorials to discover all the features of the site.

Memory Game—A game for one or more players that requires matching dominos with Chinese characters, both representing values from 1 through 10. Play it with the cards as shown in the instructions or play it online.

Match My Design—In this activity on the Math for All website, one player secretly builds a shape on a geoboard then describes it to a partner who tries to replicate it. The instructions include a link to an online geoboard.

A great source for games is a deck of regular playing cards. Remove the face cards and you instantly have a set of numeral cards from 1–10, often with images on the cards to count. Starting each player with an equal portion of the deck, you have a WIDE variety of game options!

This is also a fantastic opportunity for students to choose which version to play, or even make up one of their own.

How do Games Connect to Math for All?

The Neurodevelopmental Framework (NDF) lies at the heart of Math for All and it is used to understand mathematics lessons and students. The NDF is parsed into eight brain functions: Language, Memory, Psychosocial Functions, Higher Order Thinking, Motor Coordination, Spatial Ordering, Attention, and Sequencing.

During math games, all of these functions are in play (pun intended), but Memory, Attention, Higher Order Thinking, and Psychosocial Skills are perhaps the most prevalent and none acts in isolation from the others. Active working memory and attention are key to remembering instructions and persevering through to finishing a game. Memory and attention are also critical to understanding a partner’s moves. The psychosocial functions, which necessarily incorporate language, come into focus during partner and opponent interactions, and kick into high gear when communicating ideas, taking turns, keeping a “poker face” to conceal strategies, and maintaining an atmosphere of good sportsmanship when a game doesn’t go according to plan.

Higher order thinking comes into prominence when we develop a game strategy and predict what our partner/opponent might do, ultimately adjusting our moves accordingly. This component of cognition also pulls together other neurodevelopmental functionalities. The psychosocial function helps us develop and process our interpretation of our partner’s actions to determine which element of a strategy should be the next step. This is also how we process the information garnered from our long-term, active, and short-term memory for use in the game. Engaging in higher order thinking also allows us to determine whether we are subject to pure luck or if there is something we can do to improve our chances.

As with all mathematics lessons, when you decide to use a game with students it is important to understand all the demands of the game, so we encourage you to play the game first. Some games require partner work to complete, others might involve a little friendly competition; either way, the goal is to have fun while learning, so keep the level rigorous but the access open so everyone can play.

Math for All is a professional development program that brings general and special education teachers together to enhance their skills in
planning and adapting mathematics lessons to ensure that all students achieve high-quality learning outcomes in mathematics.

Acceleration that Supports the Whole Child

Listen to podcasts with some of our facilitators:

Tackling Inequity in the Mathematics Classroom »